IRS Forensic Investigations (“IRS”) is a private company whose members have received multiple awards, in fact members of IRS have received more awards from the security industry regulator than any other registered private investigations company in South Africa.

IRS celebrated its 20th anniversary in 2021.

In 2011, IRS Forensic Investigations, became a standalone company with Glenda Paul and Chad Thomas as directors.

IRS was the first private investigation company in South Africa to open a criminal case of Broad Based Black Economic Empowerment fronting; and worked side by side with the Public Protector on a land restitution case. IRS has also been a part of joint investigations with the specialised components of the Directorate Priority Crime Investigation, the Asset Forfeiture Unit, the Special Investigating Unit, the National Prosecuting Authority; as well as other state law enforcement agencies. Our ethos is that the only way to fully combat fraud and corruption is through effective public private partnerships.

IRS has undertaken investigation assignments throughout Africa and sent a team to the country of Benin to investigate the attempted assassination of the then President of Benin. IRS represents clients from across the globe and liaises with each jurisdiction’s law enforcement agencies.

IRS, through mainstream media and social media, reaches in excess of 2 million people per month, and IRS rates as the top influencer in the private investigations industry on social media in Africa.

Staff members have received many awards and commendations over the years from many different organisations.

Glenda Paul was featured as one of four women in the Justice Category of the Mail & Guardian “Women Changing South Africa in 2019”. 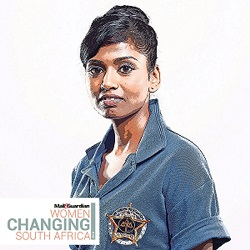 IRS staff members have received a total of seven bravery awards from the security industry.

IRS is 100% owned by a historically disadvantaged female and has level 1 BBEEE status.